The Senate in Argentina legalized aborting the unborn child up to 14 weeks-gestation on Wednesday. The landmark move will provide the procedure for free, establishing the abortion industry in the country while defying the pleas from native son Pope Francis to defeat the measure.

The voted passed by a 38-29 margin with one abstention after a 12-hour debate on the Senate floor. The bill had already been approved by Argentina’s Chamber of Deputies and President Alberto Fernandez vowed to sign the bill so the Senate was the final hurdle to make legalized abortion the law of the land.

The Associated Press (AP) reported on the development and the Pope’s reaction to it, ironically taking place over the Christmas season:

Just hours before the Senate session began Tuesday, the pope weighed in, tweeting: “The Son of God was born an outcast, in order to tell us that every outcast is a child of God. He came into the world as each child comes into the world, weak and vulnerable, so that we can learn to accept our weaknesses with tender love.”

Also outside the legislature, a group that calls its members “defenders of the two lives” set up an altar with a crucifix under a blue tent. Dressed in a white smock and light-blue face mask, teacher Adriana Broni said that even if the abortion law won approval, “I will not teach that it is a right to kill, murder, a baby who has no voice.”

Supporters said the bill seeks to eradicate the clandestine abortions that have caused more than 3,000 deaths in the country since 1983, according to figures from authorities. In addition to allowing abortion within the first 14 weeks of pregnancy, the legislation also would establish that even after that period, a pregnancy could be legally terminated if it was the result of rape or if the person’s life or integral health was in danger.

The 3,000 death statistic, however, pales in comparison to the millions of unborn babies that are aborted every year and the estimated 2,300-plus who die from abortion every day in the United States. 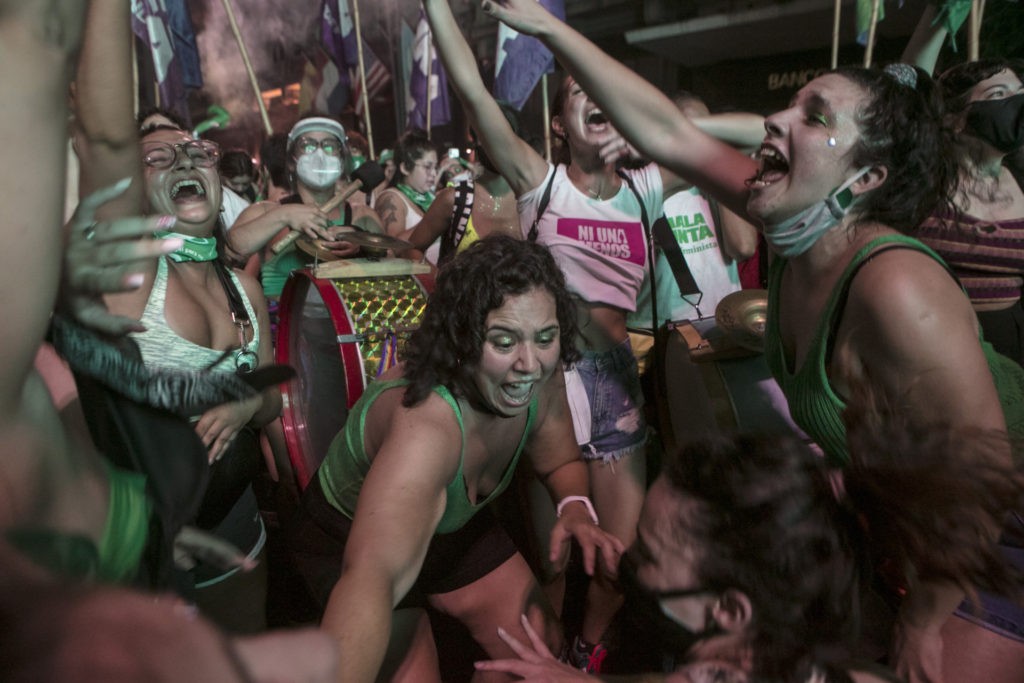 Demonstrators celebrate after abortion is legalized on December 29, 2020 in Buenos Aires, Argentina. The proposal authorizes legal, voluntary and free interruption of pregnancy until the 14th week while allowing doctor’s conscientious objection. It is the ninth bill to legalize abortion treated by the Argentine Congress and the first one publicly supported by the president of the country. (Ricardo Ceppi/Getty Images)

The New York Times reported on how the new law will inspired pro-abortion activists in Latin America:

The effects of the legalization vote are likely to ripple across Latin America, galvanizing reproductive-rights advocates elsewhere in the region and leaving them hopeful that other socially conservative nations could follow suit.

“Legalizing abortion in Argentina is a gigantic victory that protects fundamental rights and will inspire change in Latin America,” Tamara Taraciuk Broner, the Americas deputy director for Human Rights Watch, said in the Times report “It’s predictable, however, that this will also mobilize pro-life groups.”

“I feel a profound sense of anguish that in this country that I love the right to life is not respected,” Abigail Pereira, 27, who had been out in Buenos Aires protesting against legalization, said in the Times report. “But I will keep on fighting.”